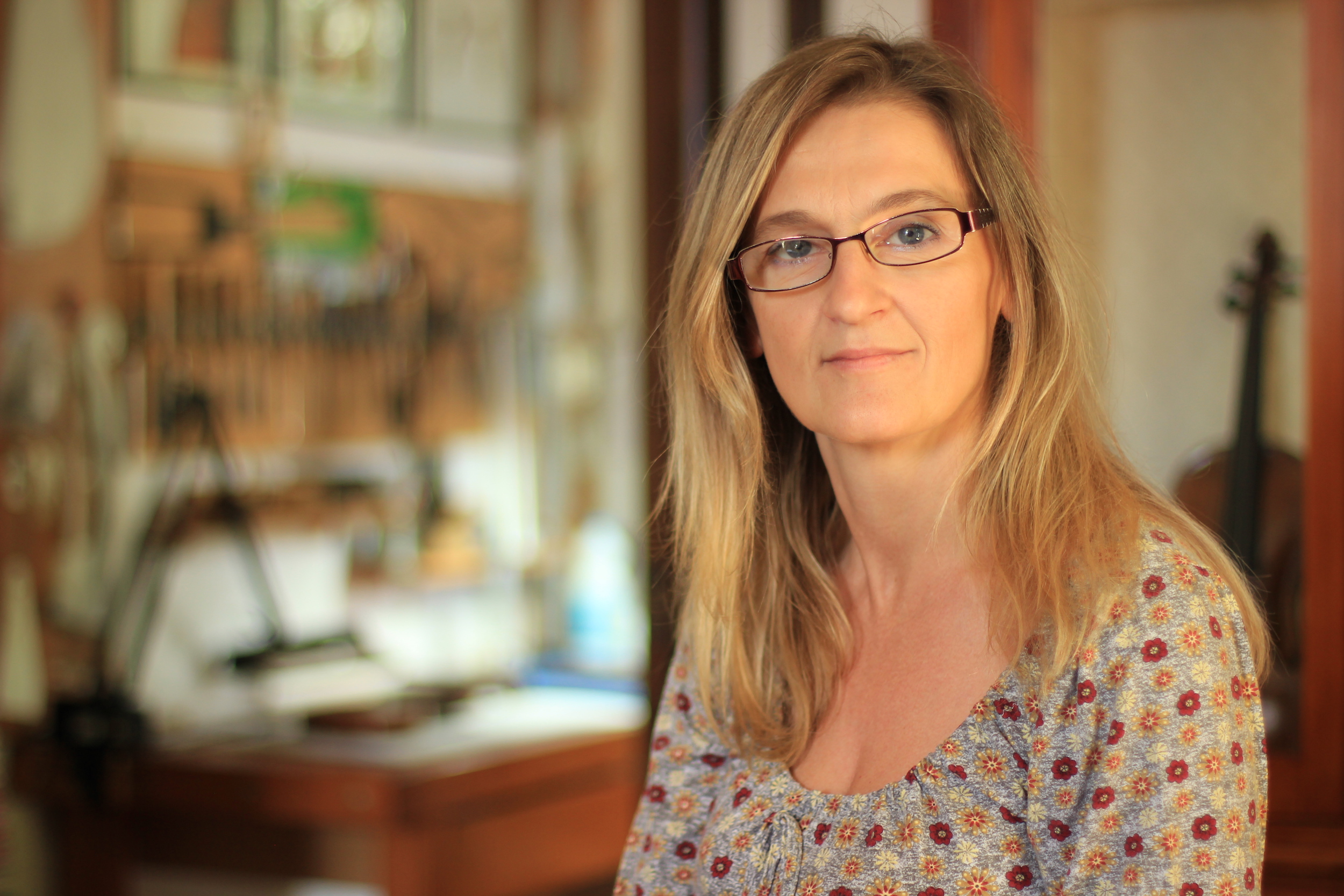 Violin maker daughter of a violin maker father, Elisa grew up in close contact with Renato Scrollavezza's activity as a luthier, from whom she also naturally inherited a passion for art, antiques and a free and creative vision of existence on which her future will be modeled. The decision to follow in her father's footsteps on a professional level was taken at the age of 18, with the choice of following the course held by him at the Parma Conservatory of Music, while attending at the same time the violin classes and later music pedagogy. With this decision, Elisa was able to enter a group of gifted and passionate students, including Lorenzo Frignani, Marco Minnozzi, Barbara Morello and an international milieu of classmates who opened her horizons outside the family context.

After graduating in 1991, Elisa started her own independent production, though closely linked to the example of her father Renato, who she began to assist as an instructor at the school. In the following decades and until today, Elisa has had a fundamental role in forming generations of students, who in turn often became successful luthiers, and she has also been handling of all the complex organizational aspects related to the management of the school. In fact, in 1992, despite the quality of the training given there, the Parma violin making school had to leave its premises, granted by the Conservatory and previously occupied from 1929 till 1936 by the classes held by Gaetano and Pietro Sgarabotto, to start an independent initiative. With determination and despite continuous changes of location, Renato and Elisa Scrollavezza succeeded in guaranteeing the continuity of a frail but noble tradition until the moment in which, in 2006, the Municipality of Noceto offered to the Lutherie School the newly renovated premises at the Rocca dei Sanvitale on occasion of the inauguration of the "Castello della Musica". From that moment, Elisa has been teaching together with Andrea Zanrè and Renato until 2014, the year from which, because of the latter's advancing age, Elisa assumed the role of course director. In the meantime, the instruments made by Elisa have enjoyed growing success in Italy and abroad, particularly in Germany, the United States and Japan. In 2001, Elisa Scrollavezza and Andrea Zanrè, together with Lorenzo Frignani and Marco Imer Piccinotti, joined in founding the association Liuteria Parmense which, in addition to managing the school in the years to come, has been organizing exhibitions and has participated in very successful trade shows: Cremona Mondomusica, the Frankfurt Musikmesse, Music China, the Kronberg Viola and Cello Festivals and gatherings organized by the European String Teachers Association. At the same time, Elisa was active organizing lutherie masterclasses which involved some of the most important luthiers and restorers on the international scene, with whom Elisa had in turn come into contact by attending specialization seminars at the renowned Oberlin workshop, in the United States. In 2002 Elisa opened the Scrollavezza & Zanrè atelier with Andrea Zanrè, where she mainly devotes herself to the making of violins, viola and cellos for a clientele of international customers and professional musicians. The collateral activities include the making of replicas, dealing, restoration and the field of specialized publications. In her work, Elisa naturally follows the style and techniques of her father, combining respect for family tradition with her personal taste. Having a passion for sculpture, Elisa has also engaged in the creation of decorated instruments, working for well-known musicians including the violinist Fabio Biondi. Over recent years, Elisa has given presentations and conferences in important venues, including the Parma National Gallery, the Museo del Violino in Cremona, in Taiwan, Hong Kong, Tokyo, Cartegena (Colombia), in the United States and Canada during the biennial meeting of the Entente Internationale des Luthiers et Archetiers d’Art (EILA), which Elisa joined in 2010, the first Italian woman to be admitted in this prestigious organization. Elisa Scrollavezza is also president of Liuteria Parmense and has served as a jury member in violin making competitions.

Since 2006 Elisa and Andrea have been managing their violin making studio located in the center of Parma and, following the death of her father Renato in 2019, she is responsible for preserving his memory and huge legacy of instruments, documents and art objects collected over many decades. In this context, Elisa is also the curator of the Renato Scrollavezza Museum housed in the Castello della Musica in Noceto.