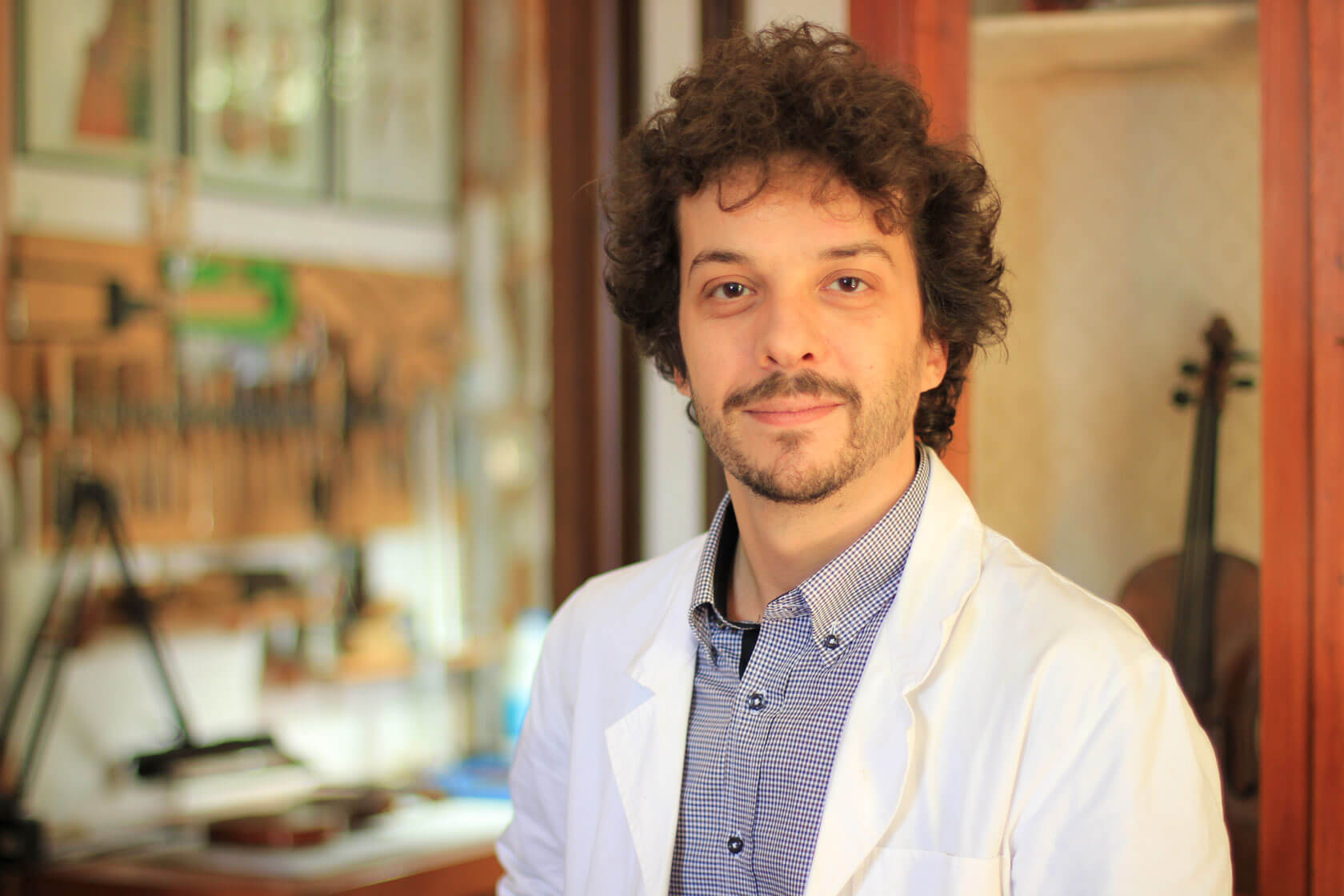 Andrea Zanrè approached violin making at the age of 18, driven by his passion for classical music and the sonority of its instruments, particularly violins, violas and cellos. He attended the Parma Violin Making School from 1994 to 1998, leaving before having obtained his diploma, and at the same time graduated with honors in philosophy at the University of Parma. However, this did not prevent him from remaining always in intimate contact with his teacher, Renato Scrollavezza, who continued to exert a deep influence on him for many aspects related to his thought, to art and his profession.

Since 2002 Andrea Zanrè has started teaching violin making alongside Renato and Elisa, together with whom a year earlier he had founded Associazione Liuteria Parmense, a group of professional luthiers who had graduated from the Parma School and which from that moment will have the function of managing the courses. Liuteria Parmense, thanks to an intense exhibition activity, would also constitute an important springboard for the career of Elisa and Andrea who, in virtue of these first successes, in 2002 decided to found together the Scrollavezza & Zanrè workshop. Since 2003, Andrea has been assiduously attending masterclasses in lutherie, acoustics, set-up and restoration in the United States: at the Massachusetts College of Liberal Arts with Hans J. Nebel, and at the Oberlin Conservatory, where he had the opportunity to become acquainted with some of the leading American and European violin makers. Later Elisa and Andrea decided to adopt the same specialization model to the Parma School, organizing annual masterclasses with renowned teachers, such as Hans Nebel, Gregg Alf, Guy Rabut, Samuel Zygmuntowicz and many others. In the mid-2000s, Andrea Zanrè began making replicas of classical instruments, alongside new making and restoration: a very important step for the stylistic and acoustic refinement of his work. In 2006, Scrollavezza & Zanrè opened a new workshop in the center of Parma (initially located in Strada Farini), which quickly established itself as one of the most important on the national scene. Having specialized in making replicas of Giovanni Battista Guadagnini, Elisa and Andrea welcomed an idea, initially launched in 2008 by the Boston dealer and expert Christopher Reuning, to organize an exhibition dedicated to this violin maker on the occasion of the 300th anniversary of his birth. The exhibition was inaugurated in September 2011 at the Parma National Gallery, and Andrea Zanrè became co-curator together with the art historian Davide Gasparotto. The scientific committee of the exhibition, which is remembered as one of the major events in the field of violin making of that period, included, in addition to Scrollavezza & Zanrè and Christopher Reuning himself, experts of the caliber of James Warren, Duane Rosengard, Eric Blot, Simon Morris of J & A Beare, Philip J. Kass. Alongside the exhibition catalog, Scrollavezza & Zanrè decided to issue an important monograph about Giovanni Battista Guadagnini (published in 2012) which was enthusiastically received and began the intense publishing activity of the following years, which continued thanks to the support and friendship of Philip Kass and the photographer Jan Röhrmann. Together with Kass and the video maker Paolo Parmiggiani, in 2013 Andrea devoted himself to a documentary about 20th century and contemporary masters (Violin Makers, The Renaissance of Italian Lutherie) which featured, in addition to Renato Scrollavezza, Francesco Bissolotti, Gian Carlo Guicciardi and Gio Batta Morassi. In 2014, together with Jan Röhrmann, Andrea laid the foundations for a new series of monographs entitled "Treasures of Italian Violin Making" focused on classical Italian instruments in an exceptional state of preservation, a series which received great acclaim in the years to come. At the same time Andrea has started an in-depth study about Mantuan lutherie, again together with Röhrmann and Kass, apprehending from the latter the rudiments of archival research and deepening his historical and stylistic skills. Since 2014, Elisa and Andrea have dedicated new studies to the founder of the Parma School, Gaetano Sgarabotto, which led to the publication of a monograph dedicated to him (“I Segreti di Sgarabotto”, 2019). Alongside his publishing activity (with over 30 articles published in recent years), Andrea devotes himself assiduously to his passions: historical and scientific research, the refinement of his taste and his knowledge of historical lutherie through the study and imitation of classical instruments, and above all the making of new instruments following the 20th century Emilian and Lombard traditions.

Prize-winner in some competitions, and in turn called to serve as a juror on similar occasions, Andrea nevertheless strives to strongly advocate a personal idea of lutherie which is anchored to the peculiarities of his historical and geographical background, and does not adapt to the pressures of standardization, opposed also by his teacher Renato Scrollavezza.